Sam is a villager who lives in Pelican Town. He's one of the twelve characters available to marry. He lives in the southern part of town, just north of the river at 1 Willow Lane.

Sam is an outgoing and energetic young man with a passion for music. He works part-time at JojaMart.

Sam can often be found practicing his guitar in his bedroom. He's also frequently seen outside of his house playing a handheld video game, or attempting skateboard tricks. On weekends he can be found playing pool at The Stardrop Saloon. He works part-time on Monday and Wednesday at JojaMart (if it is in business), or at the Museum in the Artifacts and Minerals display (if the Community Center has been restored). He frequents the Stardrop Saloon during spring, goes to the beach during summer, and visits the woods west of town in the fall.

When it's raining he'll often stay home all day, or visit the Stardrop Saloon for a few hours.

On the 11th of Fall, he has an appointment at the clinic.

His schedule can deviate if there are specific conditions like season, weather or certain days of the week. Below are his schedule deviations prioritized highest to lowest (for example when it rains that schedule will override all others below it)

Sam lives with his mother Jodi and younger brother Vincent. His mother spoils both of them, and claims that neither have ever had to do any chores. He is close to Vincent, and feels responsible for him in his dad's absence. In Spring, Year 2, Sam's father Kent returns and resides in the house with the rest of the family. After marriage, Sam will visit his family regularly to check up on them.

Sebastian and Abigail are his bandmates and close friends, and they often spend time together. When they are hanging out at The Stardrop Saloon, Sebastian is always seen beating Sam at pool, while Abigail watches from the couch. He is also friends with Penny, and will dance with her at the Flower Dance if neither is dancing with the player.

You can give Sam up to two gifts per week (plus one on his birthday), which will raise or lower his friendship with you. Gifts on his birthday (Yaz 17) will have 8× effect and show a unique dialogue.
For loved or liked gifts, Sam will say

For neutral gifts, Sam will say

For disliked or hated gifts, Sam will say

Enter Sam's house when he's there.

In any season except winter, enter the beach on a sunny day between 7am and 3pm. This event only happens in Year 1.

Enter Sam's house when he's there.

On any day when it's not raining, enter the town between noon and 4pm.

Sam shows up at your doorstop between 6am and 8am. Only triggers if you've seen his two-heart event.

After receiving a letter from Sam, enter the town on a sunny day between 8pm and midnight.

Once married, Sam will move into the farmhouse. Like other marriage candidates, he will add his own room to the right of the bedroom. He'll also set up a half-pipe behind the farmhouse where he'll sometimes go to practice his skateboarding tricks.

On rainy days, Sam may offer you a gift that he found "rolling around in the back of a drawer": Cactus Fruit, Coconut, Earth Crystal, or Geode. On rainy nights, he may offer you Pizza. On nights when Sam stays inside the farmhouse all day, he may offer you instant Pancakes, explaining that he never learned to cook. 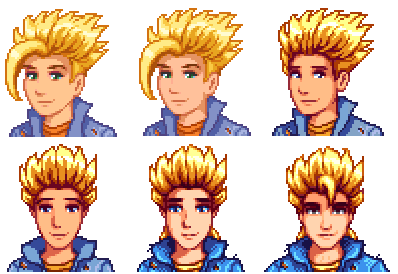