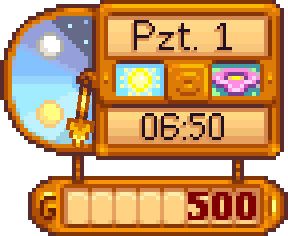 Eğer oyuncular bayılırsa, yataklarında uyanırlar, having been dragged there by either a JojaMart medical team, Linus, or Dr. Harvey if they are not married to him. In each case 10% of the player's money up to and including

1.000g will be lost (the details of this transaction will appear as a letter in the player's mailbox). An exception is if the player was lucky enough to pass out inside the house.

The game saves only after the player has gone to sleep and the daily profit breakdown has been accepted, commencing the end of day.

Sleep will restore the player's Energy and Health to full if they go to bed no later than midnight and are not exhausted, and to half if they pass out or are exhausted. The longer past midnight the player stays awake, the less energy they wake up with, with about 50% if they sleep right before 2am.

It is considered nighttime after 6pm, which makes it possible to catch nighttime fish. However, it does not become dark until around 8pm, depending on the season.

Cows, sheep, goats, pigs, chickens, ducks and rabbits will automatically go inside their coop or barn at 5pm and will start going to sleep at 7pm. They will stop moving around at 8pm.

The heart level of cows and goats is increased through successful milking, which can be done any time, including while they are sleeping.

You normally cannot interact with animals while they are asleep, making it impossible to raise their heart level. You can, however, occasionally interact with them when they are sleeping if you walk into them (especially repeatedly), causing them to move. As of v1.3 it is much more difficult to "nudge" animals by walking into them.

You can also exit the barn and re-enter; the animals will change position randomly, but this makes it hard to keep track of who has been milked.

There is a glitch where, sometimes, if the player is on their horse at 2am, they will not pass out. Instead, the game will freeze momentarily before giving back control. The player can then get on and off their horse again, and continue beyond 2am. The same thing will happen every 10 in-game minutes.

Assuming the game will not be paused, a displayed time step of 10 minutes in-game will equal 7 real-life seconds. This means:

This calculation does not contain any game-play induced pauses like cut-scenes or the selling summary after each day.

Taking this into consideration, assuming the player will use the full 20 hours (6:00 AM to 2:00 AM) available on every day and that the player will collect everything else there is, it would take 3024 minutes (50.4 hours) to "complete the game", since Winter 21st in Year 2 will be the day the last recipe of The Queen of Sauce will be available through the TV enabling the player to earn the Gourmet Chef achievement.